I was a little disappointed with the setlist, but hey, one song change from Cobourg's is better than none. Gord seemed to start out rough with the screaming but reigned it in a bit as the show went on. He was more lively/bantery than he was in Cobourg as well. I'm surprised they came back out for an encore at all seeing as it was 10:51 when they went off, and apparently Ottawa's pretty stringent re: noise bylaw.

I have photos I'll post tomorrow - I was close but my camera is terrible and photos are grainy. Some people snuck in their DSLRs which pisses me off - I could've brought my good camera!

EDIT: Here's one for now. 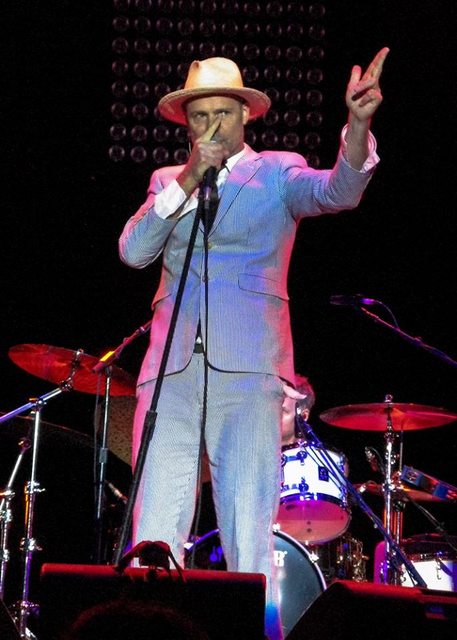 Even though the setlist was standard, I thought they gave a very nice performance. I was up around the 5th row just in front of Paul and there were lots of crowd surfing and drunken 19 year olds pushing and shoving. This was my 21st show and while I truly enjoyed the music, I don't think I'll be attending anymore festival shows. Must be asign of aging! haha

Gord seemed in a very good mood tonight and I thought he ranted a lot more than the last few shows I'd seen, especially during Poets. There was a biy of a mix up during Nautical Disaster as Gord was screaming something as the band kicked into the last part of the song (Then the dream ends when the phone rings...). He eventually got back on track but I could see Sinclair laughing...great moment.
Top

[quote="carebread"]Some people snuck in their DSLRs which pisses me off - I could've brought my good camera!

carebread wrote:Some people snuck in their DSLRs which pisses me off - I could've brought my good camera!

Oh, I thought it was no cameras with interchangeable lenses. Oh well, the only non-zoom I have is a 50mm prime and that wouldn't have done me well from the 10th row!

I took my sister to the show last night. It was probably her 7 or 8th time seeing the Hip. We got there around 6:30 and went to find a spot - we felt the spots against the centre rail were probably safest. It was actually a great spot, because standing on the metal, you were slightly higher. We stayed through through Jon Spencer Blues Explosion, who were okay, but man, I felt like they played forever.

The crowd really packed in for the Hip's set - I'm sure the people who were previously sitting out with lawnchairs were quickly taken over.

Okay, the Robby fashion report first - looking fine in his white suit! Couldn't see his shoes, but I bet they were the red ones! And I loved the hair blowing in the wind - reminded me of the outdoor Hamilton show.

No comment on the set list, but they all seemed to be in a great mood. Rob was smiling the whole time. The sound was really good, you could hear Gord clearly when he spoke in between songs, and I couldn't get over how well you could hear Paul and Gord S'. back up vocals.

I thought they were done at the end of Blow because they were prolonging the ending. It was also 10:45'ish and I knew the cut off was approaching, so I was surprised when they came back out.

Sarah
I was there
Top

This was my 20th Hip show and first one in about 3 years.

I went in knowing the setlist would be pretty ordinary and standard, but the show actually exceeded my expectations. I think not seeing them play for so long made it fun to see some of those classic old hits again.

The highlight for me was the crowd sing along during Courage with Gord answering each verse with a question. I'm not sure if they've been playing Courage this way for a while now, but I thought it was really cool.

Crowd: There 's no simple
Gord: No simple what?
Crowd: Explanation
Gord: For what?
Crowd: For anything important
etc.

All in all it was a really enjoyable show, and I even got a setlist to commemorate my 20th show.

By the way, I should mention that I stood near the back about 20 feet in front of the sound board and it was great. I had no drunk morons anywhere near me, and had a few feet of shoulder space on each side.
Top

The set list was full of greatest hits but the band's energy was great. Highlights for the show for me were Gift Shop, Courage and the crowd involvement and Blow. Which is always their best song live in my opinion. The crowd was in good spirits from where I was and seemed to be having a great time. Probably the best festival show I've been to in a long time. Keep rocking boys!