When they asked me to review the Tragically Hip, I resisted at first. It was a little late for an old sports writer to become a rock critic. And how could I be objective?

The Hip are my favorite band. Gordon Downie is one of my heroes. I get choked up at some point whenever I see them live.

Eventually, I relented. Bruce Andriatch, the Features editor, said it didn’t matter if I knew about chord progressions or bass lines. It would work out fine.

He didn’t tell me what to do if it rained.

Rain was inevitable, of course. At around 6 p.m., a hard wind was whipping through the Outer Harbor concert site, whispering bad things to come. I told myself the storm would blow through, as I do before a big golf date.

Grace Potter and the Nocturnals, the pride of Vermont, knocked ‘em dead in a one-hour warmup. Potter, resplendent in a white bathrobe and high heels, blazed through her standards, “Medicine” and “Paris (Ooh La La).” In a nod to Canadian rock, she did a stirring cover of Neil Young’s “Cinnamon Girl.”

In a tribute to a late friend, Potter sang, “I can’t look at the stars.” I looked up, anyway.

Dark clouds were moving over the venue and toward the south. Maybe we’d be spared, after all.

At 8:45, the Hip arrived on stage, as their faithful fans exulted. Thirty years and still the same five guys: Johnny Fay on drums; Gord Sinclair on bass; Paul Langlois and Rob Baker on guitars; Downie, the genius front man, singing, ranting and dancing around like a puppet come to life.

Downie was dressed in a seersucker suit, with a black tie and fedora. In exaggerated diva fashion, he wiped his head with a white handerchief. He wiped his shiny belt buckle. As always, he treated the microphone like an animate friend.

I was about 20 feet from the stage, right in the center. No VIP status or backstage pass for me. I wanted to be with the people. I was surrounded by kids and people in their 50s. Clutching my notebook, I felt like Bill Miller, the 15-year-old kid in the movie “Almost Famous.”

The Hip began with “At Transformation,” from their 13th and latest album, “Now For Plan A.” The second line of the song is “Through the night it’s been raining venom.” I kept seeing omens.

Then it was “Grace Too,” one of the Hip’s signature concert numbers, which pulls inveterate Hip watchers right into Gord’s orbit. I was right there with them, lifting my right arm toward the Buffalo skyline and singing along, “I come from downtown, born ready for you.”

Did I mention my lack of objectivity?

They moved on to “Escape Is At Hand For The Travellin’ Man,” a quirky fan favorite that evolved into a live staple. Then Downie did “Man Machine Poem,” another number off the latest record. Ask Jeff Miers if you want to know what it means.

At one point, Downie used the microphone stand to paddle himself across the stage. He has a thing about water. Two of the Hip’s biggest numbers are “Nautical Disaster” and “New Orleans is Sinking.” Evidently, he sensed a nautical event was about to unfold.

The rain began at the very instant the Hip launched into their fifth number, “Love Is A First.” It was dark by then. The rainfall came swiftly and suddenly, slanting sideways across the stage, splashing off the black floor and the instruments.

Unfazed, Downie sang at the very front of the stage, letting the rain pour over him like applause. He held out his hat, collecting random raindrops.

The weather was a curse. So be it. We’re Buffalo fans. We endure. We get the Hip, and Downie gets us. He talked about our beautiful city. He chided the rain.

“Don’t take any undue pride,” Gordon said, “because we saw you coming.”

They stopped the show for 15 minutes. Langlois came out, drinking from a red plastic up and smoking a cigarette. Downie sat near the front of the stage, his hat between his legs. He clacked cups with Langlois.

A “Let’s Go, Buffalo” chant went through the crowd. I doubt many of the 12,000 fans left. Downie delivered a couple of his rambling soliloquies.

“In a flooded world,” he said, “it’s the women who are the swimmers.”

Downie said there were electrical problems, but he was confident the show would resume. Then he and Langlois did a two-man rendition of the lovely “Wheat Kings.” The crowd helped him out, blaring out “Wheat kings and pretty things, let’s see what tomorrow brings!”

That’s when I started to cry. For more than 20 years, the Tragically Hip have been an emotional touchstone for me, one of those unforeseen benefits of moving to Buffalo and living next to Canada, along with hockey, wineries and Niagara on the Lake.

Downie and Langlois performed “Scared,” a personal favorite of mine. At 9:45, Downie delivered the bad news. Even worse weather was coming. The show was over. People had to leave.

“Let’s do it nice and orderly, slow cool fashion,” Downie said. “We’ll all get safe and take a shower, and this will all be some strange dream.”

He thanked the fans, twice. Later, as the traffic jam snaked its way out of the parking lot, the Hip agreed to reschedule the concert, likely within the next month. Fans will be reissued tickets from their point of purchase.

Promoters said the Hip were under no contractual obligation. But they feel a commitment to the fans of Buffalo, who have stood by them all these years. There’s a mutual love there, an almost sacramental bond.

In its own way, Friday was a show to remember. It was tough to walk away without hearing “Courage,” “Ahead By A Century” or “Little Bones.”

But I’ll never forget Downie improvising his way through a rain delay. It’s good to know they’ll be back soon.

I plan to be there. This time, as only a fan.
"We're forced to bed, but we're free to dream"
Dana
Top

The hip opened up with at transformation, followed by grace, escape, and manmachine before pummeling into love is a first, as the chorus hammered in so did the storm, the band was getting pelted with rain, from downie to fay, as winds ran through the stage. A silhouette of rickashaying raindrops formed around each member. With instruments dripping, the band finished the song. 'Hey rain, don't take pride, we saw you coming all day', Downie said seemingly. Drenched in white, Rob walked to the stages edge with both hands up trying to halt the rain. As the winds picked and the rain poured, the crowd roared on. The boys shimmied to the side as the crew worked relentlessly to cover the gear. Gord stood alone, statuesque, front center, as the rain painted over him. Planting the mic like a flag, this was his stage to stay. The crew hustled away, improv inlayed, as gord sherpa'd the crowd through the storm. One memorable sketch was of Rod Stewart; something like.. "Did you hear rod had to get a quart of semen pumped from his stomach...10cc's a load, that's 243 men, lined down a hallway, by 76 he'd have to be chafed, Bull shit, didn't happen - f**k you"....'Eggs n bacon', 'laminar flow' 'I love the crew' 'baby blue canoe' ....banter, tangents, and dedications continued for 20 or so minutes before the crew got one guitar back up. With just a guitar and mic, Paul n Gord broke out wheat kings and scared. The inevitable announcement followed, 'the show must end, a bigger storms a coming, you should go, the Hip will be back...
Best frontman of all time.
Top

Thanks Dana for posting my pix. And to thecompletist for the youtube clip. Do you think the rest will make the rounds?
Top

I am so bummed. The Smithereens and Hip as a double bill would be awesome! Had tix for tonight in Aurora, was going to drive with a few buddies from Detroit... Sounds like a crazy Buffalo night!
Top

.
DSC05754 (Large).JPG
You do not have the required permissions to view the files attached to this post.
"We're forced to bed, but we're free to dream"
Dana
Top

awesome review in this mornings Buffalo News. this was Sullivans first concert review. I loved him in the sports section for the last 20 years and never knew he was such a Hip fan. great piece. crazy show!
Top

I was standing right next to Sullivan for most of the show actually, without realizing. There was a fight or struggle between someone being escorted out at the end of GP & The Nocturnals' set by security from up front, I saw punches thrown and ended with a bunch of security and cops I'm assuming taking the guy down and arresting him. Then a girl passed out, fell into me and was possibly having a seizure just after At Transformation ended and a bunch of us had to carry her right up to get help, it was pretty scary. So the night already started pretty crazy before the storm rolled in..

This was one of the best concerts I've been to, even if it was cut very short. Everyone seemingly went nuts during the downpour during Love Is A First, it was really an atmosphere I've never experienced before at a show. Gordie & the boys are all class, I'm glad they tried to wait it out and are rescheduling. Classic rants/improv from Gordie trying to keep us entertained, that alone made up for the cancellation. It was unreal to have him and Paul play Wheat Kings and Scared, we figured it wasn't part of the set. Can't wait for the make-up show!
Top

Corpse wrote:Thanks Dana for posting my pix. And to thecompletist for the youtube clip. Do you think the rest will make the rounds?

And here's the best (not great quality, I know) pic I got all night, during At Transformation.. 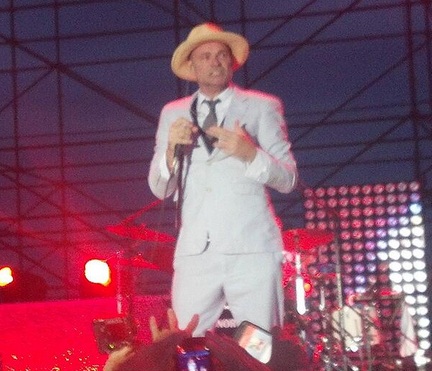 Amazing that it took a severe rain storm and lightning to force the Hip to actually improvise and change up the setlist a little bit. There's no way they would have played "Scared" if it weren't for the circumstances. Too bad they had to cancel the rest of the show, as an all-acoustic finish would have made for a truly unique experience, which is pretty rare these days when it comes to this band.
Top

gibbytime39 wrote:awesome review in this mornings Buffalo News. this was Sullivans first concert review. I loved him in the sports section for the last 20 years and never knew he was such a Hip fan. great piece. crazy show!

Show rescheduled for Friday August 2nd at the same venue. Triple bill with Lowest Of The Low and Flogging Molly. Concert starts at 6:45.